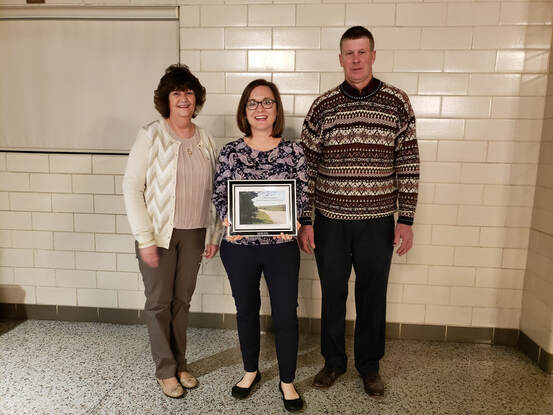 2020 Charmian Klem
On Tuesday, February 4th, at the 74th SWCD Annual Meeting held at St. Anthony Community Center in St. Anthony, Charmian Klem was presented with the 2020 Friend of Conservation award.
Klem grew up on a farm near St. Henry.  At age twelve, her father switched to intensive grazing practices and organic farming.  Because of these changes to her father’s farm, she feels that “conservation practices are in her blood”.   She believes the health of the food we eat is directly associated to the health of the soil.  She also believes that when people immigrated to the United States, the soil was found to be much better than the lands they had just left.  She stated, “Some soils are more valuable because of the life that is in it.”
She believes that others should set goals of having fertile soils by using methods to improve and maintain the quality of the soil.  She also believes that it is so worth it to educate yourself and go beyond traditions and conventions.  She and her three children organize time for their own home invasive species clean-up and have a ‘no-till’ garden using old straw as mulch.
Klem and her family have participated in the Family Nature Fest, the Creek Sweep, Patoka Lake Water Plant Tour and Patoka Lake Dam Tour.  She continues to support her dad’s farming operation by doing his record keeping once a week.  She is in her second term as a Dubois County Council member and is a liaison for the Dubois County SWCD.  Through her many years of effort with the County Wage Study, all county employees now receive appropriate compensation for their dedicated service to the residents of the county.  She is a busy mother and a self-employed Independent Beauty Consultant with Mary Kay Cosmetics.  She is also a small group leader for a Wednesday night bible study group at Redemption Christian Church.
Because Dubois County has many champions of conservation, the Dubois County Soil and Water Conservation District presents an annual award to recognize their efforts. 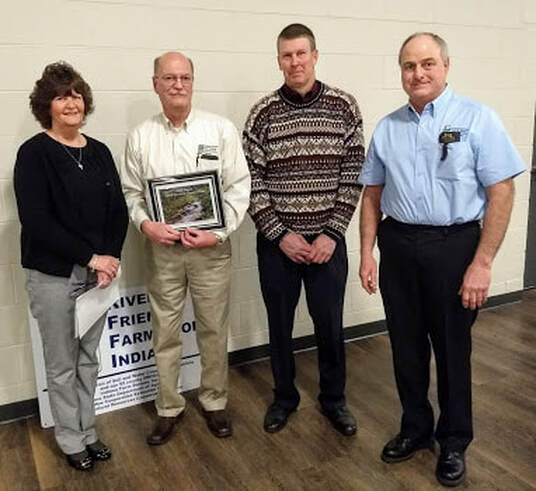 2019 Alan Smock
Dubois County has many champions of conservation, so Dubois County Soil and Water Conservation District decided to create an award to recognize their efforts.  On February 5th, at the 73rd SWCD Annual Meeting held at Venue 1408 in Huntingburg, Alan Smock was presented with the first annual Friend of Conservation award.
Smock grew up on a grain and livestock farm in Bartholomew County and was raised with ethics to respect the natural resources.  A few of the lessons his father taught him was to treat the livestock well and not work wet soil.  He realized at an early age that farming creates a great sense of responsibility for the land and believes farming has a close relationship with Mother Nature.  Natural resources are for our use and not to be misused.
Smock still owns and farms the family property which includes 10 acres in Classified Forest.  One piece of the property, owned by his brother, has been in the family since 1850.  After graduating from Rose Hulman with a mechanical engineering degree, working for ten years at GM, and getting married, it came apparent to him that it was more important where he lives than what he did.  He and his wife, Kay, searched for a year and decided to move to Jasper.  They purchased 70 mostly wooded acres and then planted 10 more acres of trees.
Since his retirement from MasterBrands, Smock served as Dubois County Soil and Water District Conservation Supervisor for two terms.  He served as Vice Chair for several years.  At this time, his philosophy changed from personal conservation actions to becoming more interested in public outreach.  During his tenure as a SWCD Supervisor, the Dean of Vincennes University Jasper Campus approached the SWCD, asking if SWCD would be interested in managing their 50 acres of crop land.  The SWCD agreed and the VUJC Land Stewardship Initiative (LSI) was born.  Smock has been a champion of the LSI program since its inception seven years ago.  He has served as the Chair of the LSI Steering Committee and has led the LSI Agriculture Operations Committee since 2012.  He attends conferences to learn more about soil health and brings his wealth of knowledge to bear on the VUJC farm ground.
Smock is a past member of the Indiana Forest and Woodland Owners Association and is a current member of the Four Rivers Forestry Committee.  He is active in his church and is on two boards at the Southern Hills Counseling Center.  He believes in the benefits of improving your soil’s health and continues to actively raise the awareness of these benefits to the local farming community.